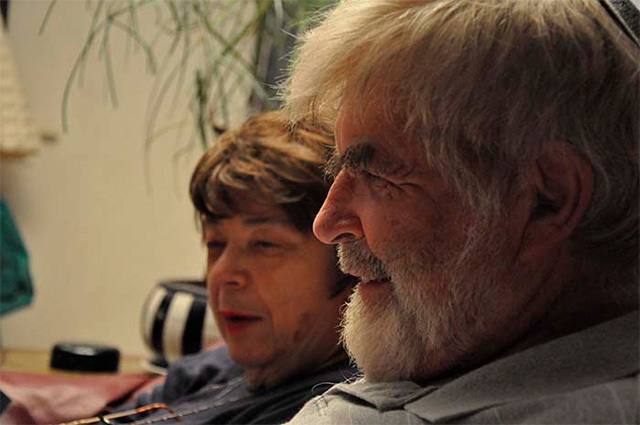 He’s smiling on his birthday. My aunt Doda Orli and my cousin Zehara have given him a birthday card signed by them, my mom, and me.

Seventy-one years after Germany invaded Poland, my grandfather stands in a green field he used to play in, surrounded by his grandchildren. Our shirts flap in a cool breeze. You can smell grass and air, dew and flowers. The sun hangs high over Lodz, Poland, wreathing the field with light. Grass and cobblestones gleam, like nothing happened here at all.

You see my grandfather tell us about the olden days, of what happened to our family nearly three-quarters a century ago. He smiles in the middle of a childhood memory, remembering … then his smile fades, his face looks his years.

My grandfather wasn’t called Iddy then: he’s Ramek, a seven-year-old boy the summer of 1935, seventy-five years ago. He’s playing soccer with his friends at a grassy park edged with trees. A tree and stone mark the sides of a goal. They’re darting after the ball, laughing. And then, someone throws Ramek to the ground. Ramek realizes who it is. His best friend is raining fists down on him, screaming, “You killed our God! You killed our God!” Ramek doesn’t know why his best friend is doing this, and starts to cry.

A day or so earlier, Ramek’s uncle was knived by a drunken neighbor who no longer liked that the uncle was Jewish.

Anti-Semitism has existed in Poland for hundreds of years, and it’s still escalating when, four years later, Germany invades Poland on September 1, 1939, and starts the Second World War.

The city of Lodz is Germanized and becomes Litzmannstadt. In 1940, part of the city is turned into a ghetto. Jews, including Ramek and his family, are moved into the ghetto, barred from the world. The ghetto is a town in chains, where terror reigns. Synagogues burn, bodies hang dead in the streets. Jews are made to wear the Star of David on their fronts and backs and arm—or else they die.

The ghetto inhabitants become slave laborers for the Nazis, working day and night in support of the German war machine. The supreme head of the Nazi SS troops—Heinrich Himmler—visits the Lodz ghetto and stays in the Hotel Grand, the same hotel we stay in seventy-one years later.

If you wander too close to the ghetto walls, bullets fly.

My grandfather shows us where he lived during the years enslaved in the ghetto—a crammed one-room apartment on the second floor of a building cracked with ruin. Burn marks riddle the ceiling like bullet holes. Cigarette smoke hangs hot and thick in the air. The kitchen is smaller than my college dorm room. In it lived a man whose wife died. The remaining room is subdivided by a sheet hanging from the ceiling. This room housed two families of four back then—my grandfather’s, and his uncle Leon’s.

In the suburbs of the city sits the textile factory owned by Kalman Shlomo, my grandfather’s father, where the Nazis came, sixty-eight years before, and found materials hidden in its attic and in the apartment floorboards.

The Nazis take the materials, packing them up in three days, but they’re hungry for more. So they take Ramek’s father, and beat him until he nearly dies. Ramek’s father won’t spill the secret where more materials are hidden, because there is no secret. There are no materials left. The Nazis took them all.

They give back Ramek’s father when they don’t beat anything more out of him. Then take him away again.

There is an apple orchard at the edge of the ghetto, outside the factory in which Ramek and six hundred slave laborers work, surrounded by barbed wire. Ramek and a coworker dig under the wire and sneak apples into britches. Ramek’s pants are filled to bulging, and now, sixty-eight years later, Iddy imitates the pant-bulge of apples with his hands, chuckling, lost in a memory.

The apple orchard is gone when we visit. A bush marks the spot under which Iddy and his friend dug. The factory Iddy worked for all those years is now an orphanage. Crayoned pictures of the sun and grass and trees by the orphaned children do little to brighten the building, dark despite the sun, because the orphanage itself was drained of color long ago.

A Jewish guard watches Ramek walk back home from work. But when the guard notices the lumps in Ramek’s pants, unmistakably filled with stolen apples, he turns around, looks away. Like he didn’t see anything at all.

Ramek’s father keeps turning the stolen apple in his hands. He has not seen an apple in more than three years. Beaten, with a punctured lung, starving and bloody, he still speaks two blessings—one is the Shechecheyanu, thanking the Almighty that he’s still alive—before he bites into the apple and tastes the juices flowing into his mouth.

Being tortured by the Nazis left Kalman Shlomo ill. He’s still ill when the Nazis decide to perform a selection. Anyone in the ghetto who is too old, or too young, anyone too sick, is shipped to Auschwitz. Ramek’s mother brings out some lipstick and dabbles it on the boys’ and their father’s cheeks. Two of Ramek’s cousins, only children, aren’t so lucky: the Nazis pick them out.

They escape by sliding down and hiding in the building’s outside sewer ditch, a single hole set into the ground, swimming in everyone’s urine and feces. But only that time. The next selection, Nazis force them onto the train to Auschwitz. Iddy never saw them again.

Kalman Shlomo is dying. He’s only forty-three. Ramek and Yisrael, both brothers, are standing at their father’s deathbed to hear his last words. “I will never get nachas from these beautiful boys.” I picture him: sad, filled with regret for so many things … mainly, that he would not see his children grow up. There must have been so much to say. So much to be there for.

But Kalman Shlomo had no more time.

After a long time, Iddy speaks to his father. He looks down at his father’s name. I see the pain in his eyes; they look at Kalman Shlomo’s tomb, and beyond, beyond the old stones—talking to a memory, as if his father is alive again. I feel like crying.

Ramek and the factory workers make boots from cow hides for the freezing German soldiers in Russia. They work the whole day to earn only a loaf of bread and a bowl of watery soup for the week. Starving workers crawl desperately to toil one more time. Some, after finally dragging themselves into the factory, die working the machines.

Occasionally, the head of the factory ships workers onto a train for Auschwitz, and they are never seen again.

By this time, in 1944, the Nazis are losing. The head of the ghetto visits the factory. He says they are moving the factory and all the workers and their families to a safer place, where they will have a better life, because when the Russians come, the workers will all be killed for helping the Nazis. Ramek’s mother and brother want to leave with the factory workers onto a train, so their lives will be saved.

In reality, the train is headed toward the gas chambers—toward Auschwitz, the Final Solution. After they died, their bodies would be thrown into ovens and burned, to join the remains of the millions dead during the Holocaust. But they didn’t know that then.

Safta, Ramek’s mother, tries to coax Ramek onto the horse wagon bringing people to the train. But Ramek doesn’t want to. Safta asks the Jewish wagon-master what to do. He tells her, “Panie, if you can stay, stay.”

Today I have a family. 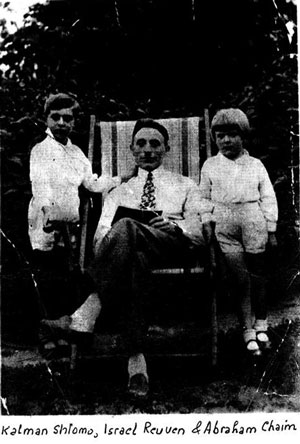 Kalman Shlomo with his sons.
(Ramek is the diminutive for Abraham in Polish.)